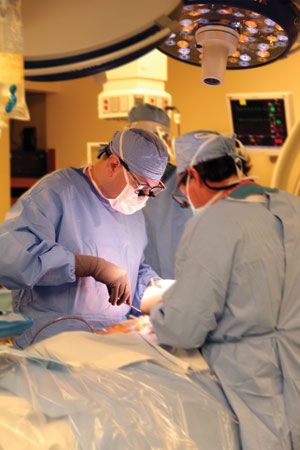 Every year in Italy, 175 thousand joint replacement surgeries: about 99.500 involve the hip, 67.300 the knee, the remainder shoulder, elbow, wrist and ankle More than 3 thousand arthroplasty surgeries with robotic technology performed
with the MAKO robotic arm system in our country since 2011 Perspectives discussed at the 102nd Congress
SIOT Italian Society of Orthopaedics and Traumatology

According to the current definition, robotic surgery (Robotic Assisted Surgery) uses robotic means that
allow the operator to perform surgery by maneuvering, at a distance, a robot that is not fully
autonomous, but capable of performing commanded maneuvers. Since the turn of the century, when the U.S. FDA gave the green light
green light for the use of the first surgical robot, it is estimated that robots have performed more than 4 million surgeries in the
world. In Italy, there are an estimated 12 to 15 thousand surgical procedures performed annually using a
robotic system. At present, about 4 thousand operate worldwide, of which about 80 are active in Italy.

Since 2009, robotic surgery has also been a reality in the orthopedic field, particularly for joint prosthetic surgery
of the hip and knee. Introduced in Italy in 2011, thanks to the MAKO robotic arm system, an estimated
3,000 surgeries have already been performed in our country with this technology. The system is now present in 12 hospitals
public and private in Italy and in more than 400 centers worldwide.

“Orthopedic and trauma surgery have, in our country, a long and glorious history. Suffice it to say that the
SIOT Italian Society of Orthopaedics and Traumatology was born in 1891,” says Giuseppe Sessa, full professor of
Orthopaedic and Traumatology Clinic at the University of Catania and president of SIOT. “In these years he continues
the specialty has gradually evolved, with the adoption and introduction of new materials and new intervention technologies,
including robotic technology.”.

Robotic orthopedic surgery was one of the many hot scientific topics at the center of the 102nd
SIOT national congress, which recently concluded in Palermo, Italy. “We dealt with the topic of complex fractures of the
upper limb, which today, thanks to improved techniques, multidisciplinary approach and ‘timing’ of
treatment, makes it possible to preserve the limb and recover its function in situations that, in the past, would have
likely required demolition surgery,” explains Michele D’Arienzo, Director of the Orthopedic and
Traumatology, University of Palermo, who chaired the congress along with Ernesto Valenti, Head
Orthopedics, La Maddalena Nursing Home, Palermo, Italy.

“We addressed the fundamental issue of infections, which often put a strain on our skills as surgeons,” adds Valenti. With more than 160,000 hip, knee, shoulder, ankle, and elbow prosthetic and revision surgeries performed each year in Italy, more than four thousand patients must, in fact, deal with postoperative surgical infections. In this aspect, robotic technology, due to its less invasiveness, should guarantee better results”.

“The first orthopedic surgery using robotic technology was performed in Italy in 2011 by applying
a monocompartmental knee prosthesis,” says Fabio Catani, Director Complex Structure of Orthopedics
and Traumatology, Department of Maternal, Child and Adult Surgical Medical Sciences, University of Modena and
Reggio Emilia. “The advantages of the currently available MAKO robotic arm system are numerous, for the
surgeon and for the patient,” Catani explains. “Indeed, it allows for more accurate, less invasive surgeries, with reduced
recovery time and postoperative complications.

In fact, it ensures the highest accuracy in hip or knee prosthesis placement (either single- or total), the three applications for which it has been validated so far. By performing a CT scan prior to surgery, which allows a three-dimensional scan of the area where the prosthesis is to be implanted, the surgeon can plan in minute detail the actions that the robotic arm will perform during the operation.
This provides the best possible respect for the bone, joint and muscle tissues involved and reduces errors in prosthesis placement, with an effectiveness far superior to that of traditional surgery, based on indicators that take into account patient satisfaction, clinical parameters and complications.”.

In Italy, according to data from the 2016 report of the Riap Project (Italian Arthroplasty Registry), coordinated by the Istituto
superior institute of health, in collaboration with the Ministry of Health, SIOT, numerous regions, Assobiomedica and Apmar
Association of Patients with Rheumatic Diseases, more than 175 thousand prosthetic surgeries are performed annually
joint (2014 data), with a 70 percent growth since 2001, when there were just over 103
thousand. 56.8 percent of the surgeries (about 99.500) concerns the hip, 38.4 percent (about 67.300) the knee, with
the remaining 3.8 percent involving the other joints (shoulder, elbow, wrist, ankle).

“Prosthetic hip and knee surgery, as these numbers show, accounts for almost all of this
type of surgery, and being able to have a robotic system with this performance is of definite interest. Although,
it must be remembered, this gift of technological evolution can never be separated, at least for the next decades from the
hand and especially from the brain of Man,” Sessa concludes.